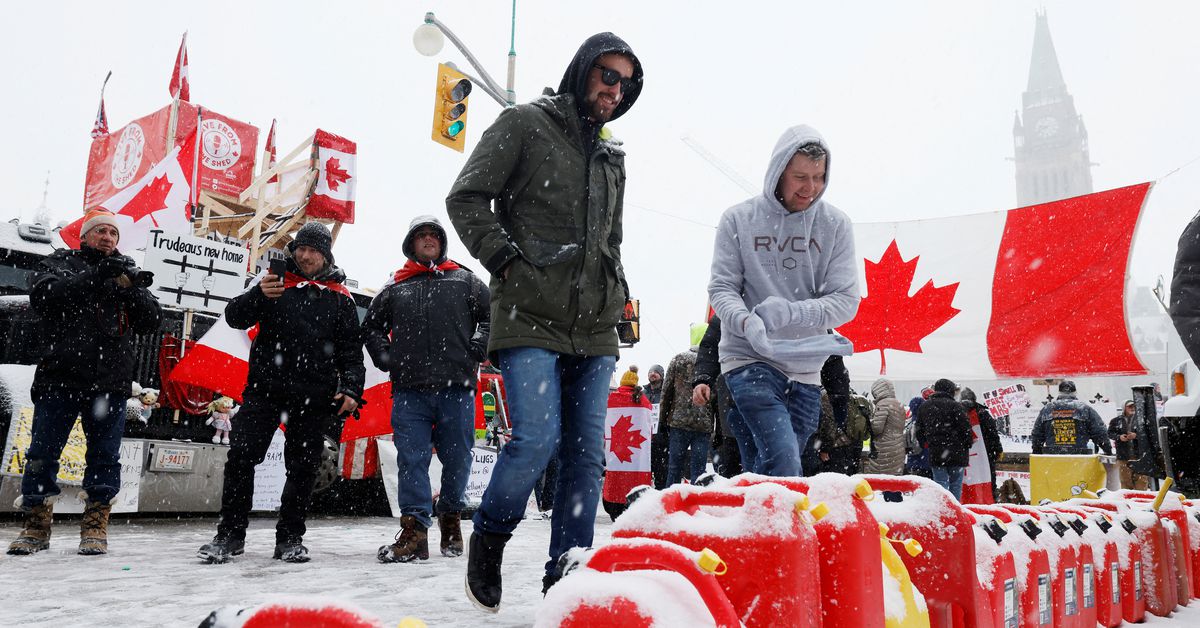 TORONTO, Feb 12 (Reuters) – The Toronto-Dominion Bank (TD.TO) has frozen two personal bank accounts in which 1.4 million Canadian dollars ($1.1 million) had been deposited in support of protesters fighting against the Canadian government’s pandemic measures, a bank spokesperson said on Saturday.

The protests, dubbed the “freedom convoy” by Canadian truckers who oppose a vaccination mandate for cross-border drivers as well as other pandemic restrictions, are now in their third week. They blockaded the capital Ottawa and blocked border crossings between the United States and Canada, which hurt trade between the two countries.

TD on Friday asked the Ontario Superior Court of Justice to take the funds, which were sent via GoFundMe and wire transfers, so they can either be sent to the intended recipients or returned to donors “who have requested refunds but whose right to a refund cannot be determined by TD,” the bank said in a statement.

TD has been “advised that its actions are inappropriate and disappointing,” Keith Wilson, a lawyer for Convoy, said in an email on Saturday, adding that Convoy will seek a court order next week to unblock donations to a new step. . – for-profit company that was created to manage and distribute them.

One of the bank accounts received a C$1 million lump sum via GoFundMe, while the rest was sent to the second account via multiple bank wire transfers, the TD spokesperson said. TD does not know where the GoFundMe payment came from, they said.

GoFundMe took down the protest convoy’s donation page on Feb. 4 after it hit $10 million, prompting most protesters to turn to Boston-based GiveSendGo. GoFundMe has noted he will reimburse the donations.

The Ontario Superior Court of Justice on Thursday ordered GiveSendGo to freeze all funds sent to help the protest. The crowdfunding platform challenged that order in a tweet on Thursday.

“We will also be taking the Ontario government to court to seek the immediate lifting of what we consider to be an unlawful order,” he said.

Other major Canadian banks did not immediately respond to emails asking if they were taking similar action at TD.

The country’s anti-money laundering agency told a parliamentary committee on Thursday that it had not seen a spike in suspicious transaction reporting by banks in recent weeks.

What is Square and how does it work? – Forbes Advisor

The Federal Bank raises interest rates on the savings account: details inside